Last week I flew out to San Francisco with my wife: she worked at her headquarters out there, and I wandered around the city in search of various foods to eat and perhaps adventure.

One thing I definitely wanted to do, given my interests and sideline career and all, was get a 3D-printed model of myself. I remember when this tech first came out in Japan, as exciting as it was expensive. But recently I’d read an article about another company mastering this technique and making it accessible to the average consumer, and that’s me. 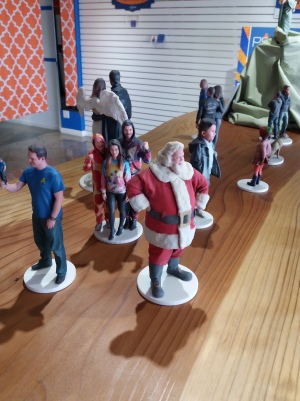 Now, in researching this process, I discovered there were two competing companies offering this service in San Francisco: Doob and PocketMe. I checked out both websites, and PocketMe listed its prices while Doob was churlish with this information. But who wants to commit to an appointment and then get surprised by the bill? The end product of each company seemed more or less equivalent, so there were no cues in this respect for me to pick one over the other.

So I looked them up on Yelp: there was no ready information on the SF Doob outlet, but Doob in NY was very negatively ranked, not least because they seemed to accept customers’ money before closing shop and fleeing. PocketMe it was!

We flew into SF on Wednesday; on Thursday I packed up a nice outfit, caught a Lyft out to Fisherman’s Wharf, and found the store immediately. A young woman was opening up as I arrived, and when I let her know I had an appointment, she asked whether I’d like to go early. I changed in back, checked my hair, and she told me where to stand: a small orange circle surrounded by black poles. I picked a generic pose, looking directly where she told me to, smiled nicely, and then there was a long, bright light and then a flash.

I’d like to say this was where I was reduced to a few inches tall, and then the young woman scooped me up for an inspection and an intimate diagnostics test… I’m sure I’ll write a story about this later.

But that was all it was. 90 cameras taking pictures of me (Doob only uses 50) in two sets: one series of all-around photos and one series of contour mapping. The clerk walked me through the entire process, showed me the images of little green triangles mapping my arms, shoulders, legs. She explained how these files will get sent back to associates in Eastern Europe, who will refine the images and remove the flaws and anomalies in a nine-hour editing process. Then it gets printed into a sandstone-and-resin figurine, and using this rather than plastic allows them to print the colors directly onto the figure, as opposed to color-matching and painting or some other method. However, the entire manufacturing process takes three weeks in total, so my little self will be mailed to my house around mid-February.

I chose the 3″-tall figure, not because it was cheapest, $100, but because it was the happy medium between how tall I see myself (4″) and what the ladies seem to prefer (2″). If it were even cheaper I might have done a variety of poses, like looking up in terror or stretching out one curious arm toward an off-stage subject. But I got this one as a document of where the tech is right now and a testimony to everything I’m involved with in the size fantasy creative realm.

5 thoughts on “Nearly Shrunken Down”

This site uses Akismet to reduce spam. Learn how your comment data is processed.

Tall, small, I like it all. A #SizeKink site with my - Emmet aka @GiantEmmet - thoughts and stories. Topics will include NSFW content.

[from the tumblr of the same name]

A place to celebrate size-changing erotica and macrophilia.

Nóatún (The Place of Ships)

Where gods and giants bring Njord their stories

The adventures of Normies and Anthropoles living together.

Get a seat your size, enjoy the company

We Are Star Stuff

Because we are soup snakes.

The sensuous lure of imaginary beasts. Not for children or the squeamish.

Fetish Erotica at its Finest